Perry Moves On From One "Soul mate" to Another? and Other Observations

Well friends, it seems that David Perry has a "new" soul mate... 3 months after his OTHER "soul mate" goes missing... things that make you say ..hhhmmmm... Someone he met on Craig's List?? REALLY??
It has been conjectured that the whole time he was giving Kelly such a hard time, following her and alternately begging her to stay with him, he was already lining up his next.."soul mate"...
No one gets THAT close to another person in such a short time.. 2 weeks AFTER Kelly went "missing"???
I don't think so. I think he knew this woman Melissa Walker WELL before Kelly went missing.... so sad that Kelly was SO worried about HIS reaction when she decided to leave him.. she was concerned for HIM.
According to her sisters and close friends, that was just Kelly; sweet, kind and always worried for others.

And one more thing.... I'm sure it would take a GOOD, STRONG NON-INJURED BACK to climb up that mountain in Nevada where the photo of DP and his newest lady-love/soul mate are seen... how do you suppose THAT happened?? It seems that DP is suddenly feeling SO much better...

And new girl/soul mate.. word of advice; if you want to terminate this new relationship, do it by fax.. or text at least...

One of the most disturbing events that happened this week  is that Tom Reilly, Perry's lawyer, actually "friend-ed " the Bring Kelly Rothwell Home page. I don't know about any of you, but I was appalled that he would actually have the temerity to do that. But then again, this is the same person that told everyone to "suck a rock". I can only assume that Mr. Reilly was intent on following the comments made there. His client has been sending threatening emails to people's bosses as well as several people there who frequent the site. May I assume that this was done on Mr. Reilly's advice to his client?
Interestingly enough, Buggers McGee sent in an answer to Mr. Reilly's rock-sucking comment.
Here is the excerpt...

Dear Readers: I wish I could repeat the end of a simple phrase, “Boy , are my arms tired”. Moving forward, following the advice of a certain attorney, I give you the top 10 list of things you can/should do after you “suck a rock”:
10: Have your iron level checked . (This reporter got the “all clear, dude” from the P.A.). Apply a lip ointment with at least 15spf, 30spf south of the Mason/ Dixon line.
9. Strongly suggest to your congressman/representative, etc., that Florida should secede from the Union. No, dude, I’m serious. Stop laughing and do it.
8. For God’s sake, hide that whistling sound when in company. ANY company. If the noise doesn’t recede in 48 hours, get some alum/hit up a physician.
7. Do at least 3 sets of 20 of the “fish” exercise. You know, suck in those cheeks. You’ll be talking normal in no time. Although, experience shows, not to be done in front of your mate under any circumstances after an official rock sucking. They will just be disappointed, trust me.
6. Refuse to engage in any game involving the combination of tongue twisters and whiskey for at least 24 hours. My wallet says make it 48 hours.
5. Avoid ANY liquor stores/convenient stores/Title Max. They will see you coming. No, it’s not your pearly whites, darling. Advise you were involved in an experiment as instructed by a NYS attorney to do so. Run hard and do not look back.
4. Purchase a highly toxic, industrial chemical to apply to the rock. After all, you’ve had it in your mouth. (You little minx.) Rinse well.
**3. Throw the rock at the office window. Yes, THAT office window. Don’t worry, you’re equipped with a “spare”.
2. Throw the “spare” rock at the other office window. (No highly toxic, industrial chemical needed. This one is just for effect).
**1. THROW THE ROCK DIRECTLY AT THE HEAD OF THE INFAMOUS CLIENT. YOU KNOW THE CLIENT, HE’S THE ONE GETTING AWAY WITH MURDER. *REPEAT AS NEEDED.
*Independent studies show it’s not necessary to suck the additional rock(s) in order to achieve the goal.
** Hire an attorney and refuse to speak. It is your right.
It should be noted that this is merely an interpretation of what one should do after following this particular attorney’s advice. Proceed with caution and at your own risk. Absolutely no liability assumed. FOR ENTERTAINMENT PURPOSES ONLY.
So I guess that about says it all for today..
thanks for playing...LC
Posted by Leigh Clifton at Saturday, June 11, 2011 1 comment:

Please consider down loading the search bar - it is simple and cost you nothing but provides support to our center and the search for missing persons across the nation. Please find out more how you can help the CUE Center for Missing Persons in your daily shopping on line and daily searches on the Internet. Email us your name so we can recognize your participation on our web site. At the end of this email you will find the link to information, remember "Community United Effort" CUE Center for Missing Persons.
Thank you, Monica Caison

Here's an example of how much your organization can earn:

Below is our chart so far, we need your help, again it cost you nothing daily.

SEND AN EMAIL TO YOUR FAMILY AND FRIENDS

The more people use GoodSearch on behalf of your cause, the more money it will raise! A simple email to spread the word can go a long way! Please feel free to customize the following message:
Subject: Community United Effort - C U E Needs Your Help!
As you know, I'm a supporter of Community United Effort - C U E and I want to share with you a simple way for you to help support this organization or any other cause that you care about.
Just download the GoodSearch – Community United Effort - C U E toolbar at http://www.goodsearch.com/toolbar/community-united-effort-c-u-e
Each time you search the web with GoodSearch's Yahoo-powered search engine, about a penny will go your charity or school.
Also, every time you shop online at 2,000 participating stores including Amazon, eBay, Target, Apple, Staples, Expedia, etc., a percentage of your purchase will be donated for free! The site also has thousands of money-saving coupons!
To give you a sense of how the money can add up, the ASPCA has already earned more than $30,000!
Please tell 10 friends about the GoodSearch toolbar today. They've been featured in the NY Times, the Wall Street Journal, CNN, Oprah Magazine, Good Morning America and more.
Posted by Leigh Clifton at Monday, June 06, 2011 No comments:

Why is He Hiding Behind All of His Relatives? Could It Be Because They Are All Familiar With the Court Process?? 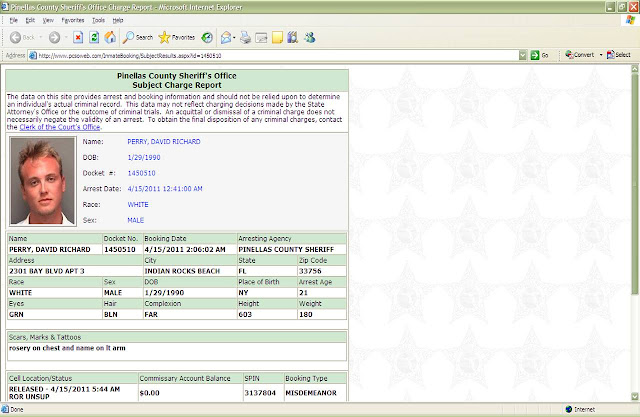 IS THIS A COUSIN DAVE??? ISN'T THIS WHAT YOU WROTE TO PETE KOTZ???? YUP WORD FOR WORD...
Tony wrote: "rumors i hear is she made herself missing once before"

I GUESS THIS IS YOUR COUSIN'S FIANCÉE??   GUESS ALL OF YOU REALLY DO STICK TOGETHER...

Carolyn Fish: its buelow and he didnt mean nething bad about that he was sayin that that is what was bein said .
5 hours ago ·

Carolyn Fish: and yes hes related but why hate on him for that ? this isnt about hate.