David Perry in Jail on Charges of Criminal Trespass 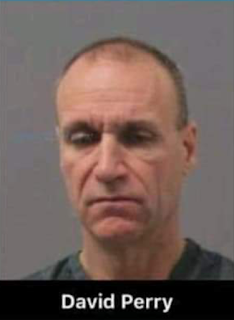 As I said in my post last night, David Perry was arrested and taken to Steuben County jail yesterday. Originally I wrote that the charges stemmed from criminal impersonation, which were the original charges.  According to Steuben County Sheriff Jim Allard, Perry was sentenced to up to a year in jail for the charge of Criminal Trespass in the second degree, a Class A Misdemeanor.  The trespass charge is from when Perry moved in with the woman from Painted Post under the assumed name of David Jones, claiming he was a retired from the Department of Homeland Security. He was arrested in the woman's home after she called police when she realized his true identity. A Grand Jury indicted Perry on 37 counts of burglary; using the times he entered the home using the false name. The charges were eventually defined as Criminal Trespassing.

As I had surmised, this conviction was due to a previous arrest in the Village of Painted Post, where he had lied to a woman he got involved with, staying in her home and traveling with her to North Carolina These were all violations of his parole, which stipulated that he not leave the county of Chemung where he resides, nor get involved with anyone unless he informed his parole officer, which he did not.

This is at least the second time that Perry has violated his parole; I've been tying to decide if he is just incredibly stupid or just thinks he's above the law. I'm assuming both. He's a cocky bastard who, because he thinks he got away with Kelly Rothwell's murder, thinks he can skirt around the law. But finally, New York has started to catch on and he has been paying the price for his arrogance. Perry has violated his parole twice now and I find it interesting that he was allowed to go back on parole after the first time, Now with a SECOND violation, and conviction of NEW county charges, Perry will have to serve at least six months, which puts his possible release date in early September 2019.  Currently Perry is in the Steuben County Jail convicted of criminal trespass. These latest charges ALSO violated his parole. With this parole violation, I would assume that he is going back to prison, possibly Clinton, the maximum security prison where he was incarcerated before. But that's not a guarantee. Based on this conviction and parole violation, Perry could have his parole revoked, serving first his sentence for the county conviction (from Painted Post) in the Steuben jail and then would have to go to any one of over 50 prisons in the State of New York until his max release date which is in 2026.

Maybe we'll get lucky and his guilt will be such a burden that he confesses to Kelly's murder.
Or he could screw up again and stay in jail, where he belongs anyway. Either way, he's once again a convicted man.

Posted by Leigh Clifton at Tuesday, February 26, 2019 No comments:

David Perry, the only suspect in the disappearance and probable murder of St. Petersburg Police cadet Kelly Rothwell was picked up today and place in custody at the Steuben County Jail in upstate New York, According to a source at the jail, the court required the jail to keep him after he was found guilty and sentenced today after being arrested last month for criminal impersonation. However, others said that the charges were criminal trespassing. Although there is no information yet (as if this writing, ) about these newest charges, Perry was arrested last year for criminal impersonation after using a false name when he met a young woman in Painted Post, New York, staying with her in Painted Post and traveling with her to North Carolina, both instances in violation of his parole.  Perry never told the young woman who he really was until a friend of hers recognized him and told her who he was. She called the police and Perry was arrested at her house last year. Perry had also used a false name to troll porn websites with searches for both women AND men, according to another source, also a violation of his parole.

Perry had been required to stay in the city limits of Elmira, Chemung County where he owns a house, per his probation requirements.  This could very well be the culmination of those charges, but it's not yet known.

On his booking photo today, he looked a tad unhappy.,AND REALLY OLD
Maybe it's all the GUILT he's been carrying around since he killed Kelly Rothwell in 2011.... 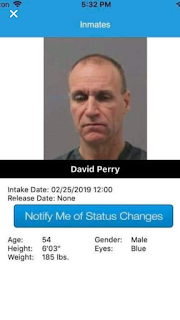 But he's NOT that smart.  He keeps getting caught doing stupid things. And one day he                       WILL be caught and prosecuted for Kelly Rothwell's murder.
There will be more on this tomorrow.

Try and get some sleep tonight you bastard...but keep one eye open.

You know what prisoners think about ex corrections officers...