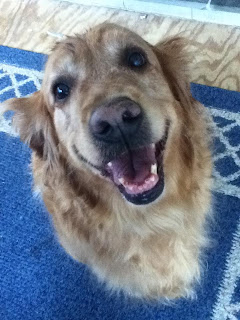 A piece of Kelly found its way home to her family last month as one of Kelly’s dogs, owned when she was married and living in Colorado, came home to the Rothwells to stay. Lucy was one of two Golden Retrievers that Kelly’s ex husband Doug Sanders and Kelly had had when they lived in Norwood Colorado on 40 + acres. Lucy was always Kelly’s dog.

“Clarence, the other Golden was always Doug’s dog,” Kat Jayroe, Kelly’s best friend since 1996 said. “They used to joke all the time that the dogs picked them individually. Lucy was two years younger than Clarence and was always so sweet… just like Kelly…”

Kat’s voice trembles a bit at the memory.The loss of her best friend has hit her very hard. She and Kelly were virtually inseparable friends; they met in 1996 in college at Adams State in Alamosa, Colorado.They went everywhere together.

“We were always affectionate and hugging each other all the time,” Kat laughed. “People use to tease us, but we were just very close; we spent a lot of time together. We both were into spiritual healing and Reike and we both loved crystals. We had a wonderful connection with one another..."

Kelly was studying geology at Adams State and in 1997 she met Doug Sanders in one of their classes. According to Kat, Kelly and Doug were like two peas in a pod.

“They hit it off right away,” she said. “They were a lot alike, both kind of reserved; they didn’t share a lot of emotions with a lot of people, but they were crazy for each other.”

So when Doug told Kat he had a friend named Jason Jayroe she should meet, Kat did and soon the four of them went everywhere together.


The four friends stayed close and lived near each other until Kat and Jason moved from Telluride to Fort Collins, about 6 hours away. But they called each other often. Meanwhile, Doug, Kelly, Clarence and Lucy all settled down as a family; Doug was a ski instructor in Telluride, Kelly in Human Resources for The Peaks Resort. Lucy and Clarence grew fat and happy.

In September of 2007, Kelly’s company sent her on a business conference to Florida. When she came back, Kat said she was changed.
“Kelly told me how great Florida was, but more than that… She said she had met an amazing person, someone who really understood her, noticed everything about her… she told me she had met her soul mate.”

No one knew at the time that that person was David Perry, who later would become the only suspect in Kelly's disappearance last March 12th.

In June of 2007, Kelly made the decision to leave Colorado and move to Florida. She packed up everything that she wanted into her green Subaru and drove to Florida.

“I’ll never understand why she did that,(move to Florida) but I guess her relationship with Doug, in her eyes, had run its course.”

She left Lucy and Clarence with Doug.

“I think Kelly knew that the dogs would be better off with Doug; they were used to the wide open spaces to run in and she had no idea what type of condo or apartment she might be living in. But I know it hurt her to leave them. She and Lucy always had a special bond. She knew in her heart that Lucy would be better where she was.”

Doug Sanders rented his house out and spent that summer in Australia as a ski instructor there. Friends watched the dogs for the summer. When he came back from Australia, he opted to keep renting his house out, opting instead for a smaller apartment that was much closer to his job. But with that consolidation came space issues; Clarence and Lucy were both big dogs and Doug didn’t have enough room for both of them.

“About two months ago, Doug asked Jason and I if we could take Clarence. He was originally going to just keep Lucy. Then Jason got the idea that maybe the Rothwell’s would like to have Lucy. She was such a part of Kelly’s life and both of us thought it was a great idea. Nancy (Kelly’s mom) had already met both dogs when they came out to Colorado for Kelly’s wedding. So Nancy knew what a great dog she was. Jason called Nancy; she said she would be happy to take Lucy. So between Doug, Jason and Nancy, they got all the necessary preparations done for shipping her East.”

Jason bought a large dog crate and Kat worked with Lucy for a few days helping her get used to it.

“Lucy is just such a great dog; she is so mellow and well-behaved. I just love her!” Once again, emotion takes hold and Kat sits quietly for a moment before speaking again.

“We kept Lucy for a few days to help her get her acclimated to the large cumbersome dog crate. Jason and Nancy Rothwell coordinated the flights from Colorado to Maryland, where the Rothwell’s live. We talked with both Lauren and Nancy about; they were excited about having Lucy. They said it was like a piece of Kelly was returned to them.”

But giving Lucy up was the hardest part for Kat. Lucy represents to her all that Kelly was; vibrant, strong, alive, beautiful. Lucy was Kat’s last real connection to Kelly; to give that up was very difficult. Kat said goodbye to Lucy at the house, then sat in the front yard and cried for her friend.

“The last thing Kelly said to us when she left for Florida was, “Please take care of things and watch out for Doug. Make sure they’re all ok.. That’s how Kelly was, always thinking of others. I never saw her again…”

So as one door closes on this story, another now opens.

After a long 7 hour plane ride and a few delays, Lucy arrived safe and sound in Maryland and is now in the care of Nancy Rothwell, Kelly’s mother. According to Nancy, she is adapting well and sleeps beside the bed, just within an arms gentle reach of her. Nancy feels blessed to have her.

“She is such a sweet heart,” Nancy gushes. “She is so good and well mannered. I have to tell you, it really does feel like we’re getting a part to Kelly back too. And she just LOVES Lauren!! I’m very thankful to Doug and Jason for putting this all together! We all are so grateful… I really do feel like a piece of Kelly came back to me. When I hug Lucy, I remember that Kelly too, is present. It gives me great comfort just knowing she is here with our family.”

Lucy is now at home, among the things and people that helped shape Kelly Rothwell. Lucy is much loved.

“Lucy will always remind me to keep moving, go forward and persevere,” Nancy Rothwell said with a hint of sadness. “She is a part of Kelly that I could get back…... It’s what I can hold onto.”

Its been a year and still there is no word on where Kelly is or what happened to her.

This article contains information that was obtained exclusively by me, is copyrighted and cannot be used or reproduced in any way without my express permission for it's reproduction unless/ and/ or/ is expressly attributed to Leigh Clifton and Tampa Bay Crime Report. Leigh Clifton © 2012
Posted by Leigh Clifton at Wednesday, March 07, 2012 6 comments: