Today's announcement by the Pinellas County Sheriff's Department  formally naming David Perry a suspect in the disappearance of Kelly Rothwell was greeted with sighs of relief and speculation. The announcement could not have come at a better time; family and friends of Kelly have been speculating about the case's status for weeks. But Detective Mike Bailey, the lead on this case, and coincidentally the same detective who broke a 20 year old cold case wide open and solved it on this day as well, can feel a sense  of accomplishment and progress, however small it might appear to be to the public.

The very naming of Perry as a suspect will put him in a bigger spotlight, one he seems to like to be in. He has constantly taunted the family and friends of Kelly on a Facebook page that claims his innocence, while quoting such a bizarre range of notables as Buddha, Green Day, Cat Stevens, Transcendental Meditation and praising his attorney Tom Reilly's statement to the press to "suck a rock" in an effort to try and convince the three  official readers who"liked "the page of the depth of his soul.

More interesting STILL is the news today that Perry QUIT his gym membership , announcing he was moving to Hawaii with his girlfriend, BEFORE Kelly Rothwell went missing. Further, it seems that his NEW girlfriend, Melissa Walker HAS moved to Hawaii , no doubt awaiting her "soul mate" and true love, David Perry. This speaks volumes in that it seems Perry knew BEFORE Kelly went missing that he was "moving" to Hawaii... how do it know???? Can that be an important clue as to his state of mind regarding Kelly  PRIOR to her disappearance? The things that make you go hhhmmm sometimes.... really?

The news today was a long time coming for Kelly's family, especially her mother, Nancy Rothwell. I know Nancy and respect her need for privacy , away from the glare of the media lights and cameras. She is a kind and gentle woman who has lost her daughter and while the public may not hear from her often, she is non-the-less fighting for her daughter's justice  behind the scenes. Today's news for her was good and evoked a sense of cautious optimism. She is always very careful with her words...

"I feel that today is a definite step closer to finding justice for Kelly," she told me earlier this afternoon."  Now he (David) needs to come forward and own up to what he's done. It seems to me that when he does, he  will eventually feel better. His true colors are going to show."

Listening to Nancy, it's easy to see where Kelly gets her sense of fair play and even temperament.Even in her grief, Nancy Rothwell feels that David Perry will  do the right thing, admit that he harmed her daughter, and own up to it, accepting the consequences of his actions. However, it doesn't mean that Nancy doesn't believe in judgement AND justice for her daughter.

"I feel that Kelly really believed in law and order and crime and punishment and I know she would want justice. She was focused on it and in her desire to make being a police officer her career, she always tried to do the right thing," Nancy said.

As to hearing about a new girl friend in Perry's life, Nancy had this to say;
"It's scary to think that this young woman is involved with this man," she said  carefully. "Its a scary thought that even with the facts in front of her, she isn't seeing all the signs and what type of person he really is."

Nancy is referring to  family court documents from Chemung County, New York, documenting domestic violence calls that were made to the Elmira police from David Perry's house when he was married to his first wife, Luana. She has since spoken out about his extensive abuse of her AND her kids. Interestingly enough, Perry's children seem to back up his story that he knows nothing of Kelly's  "disappearance," and have either refused to speak to police or have retained an attorney.

Kelly's sister Lauren greeted today's news with some reticence, but also with  cautious optimism and a sense of relief.

"Everybody has been so beautiful; people who don't even know Kelly have been so supportive of our family. We want everyone to know what a blessing that is for us. We have stayed primarily behind the scenes and let the police do their job on Kelly's case. My family and I knew  knew all along that it would come together and today is a huge leap forward towards finding Kelly."

Lauren said that her family believed all along that Perry was involved in Kelly's going missing.

"I called him that Monday, the 14th, after she was reported missing," Lauren said, "and the first thing out of his mouth  was "have you heard from Kelly".... I asked him where Kelly was and he just went off on a tangent, talking about how she "met a  new friend and moved to Utah" , then he said he was in New York, like he'd been there for a while.. it was very strange.He was really rambling.... I finally hung up on him."

Lauren said that her family has been very patient with law enforcement and their efforts to find Kelly ... and a suspect.

Lauren has some thoughts about Perry's actions..

"The moment he took off for Elmira, it raised all kinds of red flags. I hope that his new girlfriend finds out about his true self in time. He is NOT O.J.Simpson; he thinks he will beat this. Every thing he'd doing and saying; running back to Elmira, NOT cooperating with police, running from the Pinellas County detectives when they tried to talk to him... ALL of that bizarre behavior just points to guilt, NOT innocence.

I asked Lauren if she felt that anything was possibly allegedly  premeditated on his part.

"If he DID kill my sister, I don't think it was planned out.. but now that I hear about the gym membership, I am thinking differently. I DO know that with Kelly becoming a cop, she would have naturally been curious about him. Maybe she found out about what he was REALLY like, or she learned something about his character that he found out she knew about. Kelly was going to be a cop and he was a dirt bag. I think there are things that he is involved with that Kelly probably  found out about...things that he would get hurt by if anyone found out. I think that there was a lot of stuff she dug up on him. His personality is such that people don't leave him; he leaves THEM. Maybe that was too much for his pride or his  extreme OCD personality. But that's just my opinion; I'll never know now I guess..." Lauren's voice drifted off.

As we being to finish up our talk, Nancy Rothwell  sighs a big sigh ... she knows that today's news is a positive step, but a baby step in the grand scheme of things. There is enormous hurt yet a quiet dignity in her voice.

'I want people to know that Kelly was a beautiful person who deserves justice; her family and friends would like to see that. We want to thank everyone for their wonderful support. We also want to thank the Pinellas County Sheriff's Office and the detectives that have been working so hard on Kelly's case. We know they won't stop until justice is served for Kelly. Meanwhile, we will take things as the come and be grateful for ANY information that can lead us to Kelly's whereabouts. We're offering a $25,000.00 reward for information leading to where Kelly is. In addition, any money collected on the website, IN ADDITION, from the search fund donations on that site, will ALSO be part of the reward. Please, someone out there knows something and we need your help to bring my beautiful daughter, Kelly Rothwell, home."
Posted by Leigh Clifton at Wednesday, June 15, 2011 7 comments:


Pinellas County Sheriff's Office Homicide detectives investigating the
disappearance of police cadet Kelly Rothwell have now named her boyfriend,
David Perry, as a suspect. Since Rothwell went missing on Saturday March 12,
2011 detectives have worked to determine how and why she disappeared.

Throughout the investigation detectives have learned from the family and
friends of Rothwell that she would not have gone voluntarily missing. They
told detectives the night she went missing was the same night she was ending
her volatile relationship with Perry and moving out of their Indian Rocks
Beach apartment.

Detectives have long called her boyfriend David Perry a witness in the
investigation, and have repeatedly requested his cooperation. To date Perry
has still failed to acknowledge detectives requests for interviews regarding
that night, and they believe he is intentionally withholding information.
They say he fled to Elmira, New York where he has family, the same night Kelly
was reported missing by friends in Florida. Now those Elmira family members
have stated they will not talk to detectives about Perry and Rothwell, or they
have requested an attorney to be present during questioning.

His bizarre behavior and lack of cooperation coupled with detectives recently
learned Perry began a new relationship with another woman shortly after
Rothwell disappeared, has detectives now naming him a suspect in her
disappearance. Detectives will continue their pursuit of the truth about what
caused Rothwell's disappearance with or without Perry.

Detectives continue to ask for anyone with information about the couple and
specifically David R. Perry to please call Pinellas County Sheriff's Office
Homicide Detectives Michael Bailey and Amy Plourde at 727-582-6200.

Sunday night, June 12, 2011 was a day that should have been like any other day for Kelly Rothwell... but instead of having Sunday brunch with friends, or getting ready for another work week on the job as a police woman, friends instead gathered in front of her condo on Indian Rocks Beach to mourn.  They brought candles and orange towels to sit on and reflect about Kelly and her life.... how she touched SO many lives with her kindness, her silly laugh and her gentle nature. Kelly can't be all of those things anymore to the ones who love her, because Kelly  is "missing" and is presumed murdered. She is somewhere out there and one person knows for sure where she is and the circumstances of her demise.

But he's not talking to police. 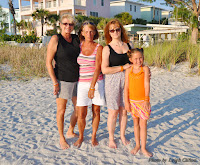 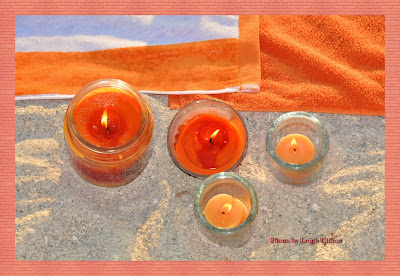 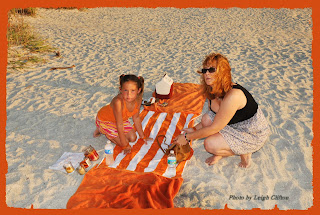 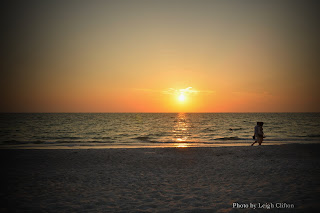 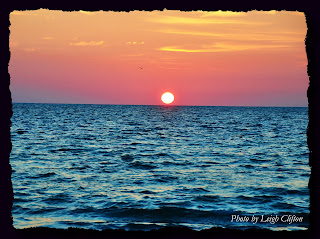 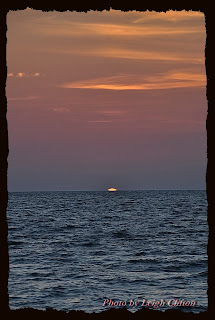 But what he IS doing is taunting people on Facebook, spewing derogatory remarks and nasty, vile comments to a family that is grieving for the loss of a loved one... a loved one that HE was supposed to care about... He has been talking to a NEW lady love.. a new "soul mate"... someone who has little idea of his violent, controlling nature. She's been warned but so far hasn't made the connection yet.

But tonight on the beach, friends lit candles and looked out onto the water as the sun set on another day... another day without Kelly's smile, and her sweet laugh~~

The world is a much lonelier place without her in it....
Posted by Leigh Clifton at Monday, June 13, 2011 3 comments: