A Year Later and Little to Go On; A Family is Still in Pain and Kelly Rothwell is Still Missing… 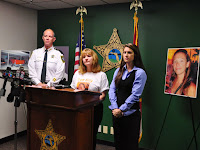 Surrounded by photographs of missing Police Cadet Kelly Rothwell to his left and David Perry, the only suspect in her disappearance to his right, Pinellas County Sheriff Bob Gualtieri spoke at a press conference this morning to update the case.

“Today marks the one year anniversary of Kelly Rothwell’s disappearance from her Indian Rocks Beach condo she shared with then boyfriend David Perry,” Sheriff Gualtieri said. “I’m here to announce that an additional $25,000.00 reward is being offered by the Pinellas County Sheriff’s department for information that leads us to where Kelly Rothwell is.”

Sheriff Gualtieri explained that this reward, made possible using money seized in drug busts, will be in addition to the $25,000.00 already being offered by the Rothwell family, for a total of $50,000.00. Sadly conceding that Kelly is in all likelihood deceased, Gualtieri nonetheless hopes that the public might have seen something then or sees something now, might remember something last March 12, 2011 that might provide a clue as to what happened to Kelly Rothwell.

“As of right now, we have few leads and we’re hoping the public will see these photos (on easels behind him) and remember something.”
Gualtieri also said he was not hopeful that Perry would give any information about Kelly, even if confronted with jail time for the New York fraud and larceny charges Perry currently faces.
"Why would he admit to an even stronger charge, like murder?"

Admitting that this was a very difficult case to work, Gualtieri said that the information they do have has been very limited. Pinellas County Homicide detectives Mike Bailey and Amy Plourde have been assigned to the case since last year: Plourde has a special tie to Kelly, in that she also attended and graduated from the St. Petersburg Police Academy, where Kelly was to have graduated from last April.
Gualtieri acknowledged to reporters that forensics from the condo search yielded little to go on conceding that since they lived together, it would be normal to find both of their DNA mingled together.

Gualtieri also said that New York State investigators sent portions of the rug in David Perry’s 2006 Honda Civic, to Pinellas County Sheriff’s Office for forensic testing of the fibers. The Pinellas County Sheriff’s Forensic Unit is widely respected throughout the US as being one of the top investigative forensic labs in the country. They did not find any female DNA or fibers on the rug, but the Sheriff admitted that the rug had been thoroughly cleaned by Perry, using very strong chemicals, prior to his releasing the car to New York detectives.
“Strong corrosive chemicals, like those in cleaning products, break down DNA very quickly,” he explained.

Last March 12, 2011, Kelly went home after lunch with a friend, with the intention of breaking up with Perry, whom she described as controlling and manipulative. At 3:30 PM, Kelly left the Chili’s Restaurant on Rt. 19 where she was having lunch with her friend Donna Scharrett in Clearwater to drive back to Indian Rocks Beach. Donna had asked Kelly if she wanted her to come with her, to help her with her belongings. Kelly declined; telling Scharrett that it “would be ok” and that she was more worried about Perry’s reaction to her leaving him, thinking he might be sad.

“Kelly was more concerned about how it would affect Dave and she wanted to be able to comfort him, in case he got upset,” Scharrett told me in an interview last March. “That’s the kind of girl Kelly was, always concerned for other people.”

Kelly walked alone into her second floor condo at approximately 4:15 PM and was never seen again.

Downstairs neighbors recall hearing a series of bangs or thuds around 4:30 PM that afternoon, then the sound of incessant vacuuming from Kelly’s apartment above theirs.
That same afternoon/evening, David Perry abruptly left Florida, bound for Elmira, New York, his hometown. Cell phone pings from his cell phone around the area of I75 and State Road 52 were later investigated by the PCSO (Pinellas County Sheriff's Office) and a search was conducted in that area. Kelly was not found. There was also a cell phone ping from Kelly’s phone around 5:20 which coincided with a text that Scharett received, purportedly from Kelly. But the strange wording and misspellings made Scharrett suspicious; they did not sound like Kelly at all. Then Kelly did not show up to retrieve keys for a house she planned to rent from a fellow cadet later on that Saturday March 12, 2011. When Donna Scharrett heard that she failed to show up, she called Pinellas County Sheriff’s Office the next morning, March 13, with a sick fear of dread in her heart. She asked them to do a home welfare check on Kelly, knowing that it wasn’t like Kelly to miss the meeting that evening of the 12th to pick up keys, especially when she had planned to move into the house after leaving Perry later that afternoon.

Pinellas County Sheriff Bob Gualtieri told reporters today that Kelly is presumed deceased and that Perry, who was officially named a suspect in her disappearance last June, has not cooperated with police inquiries. He was also suspected of traveling to both Ohio and Oklahoma during the immediate weeks after he fled to New York.

“He won’t talk, he knows how law enforcement works, and he used to be a Corrections Officer in New York. He has counsel and he isn’t saying a word. We can’t get him to cooperate at all.”

Meanwhile, David Perry became involved with a woman named Melissa Walker, a National Guard Reservist, who Perry met on Craig’s List. Whether or not he started an online relationship while he and Kelly were still together is not yet known. But too many coincidences keep popping up. Perry told the manager of the local gym where he worked out, that he was moving to Hawaii soon and to cancel his membership. Then shortly thereafter, Melissa Walker, who was living in Las Vegas, was re-stationed at Tripler Army Hospital, in Hawaii.

With Perry returned to New York, charges were filed against him by the New York State Insurance Fund, who paid his Workman’s Comp claim from October 2003, in which he claimed to have been injured in an inmate-related altercation. Several of his fellow Corrections Officers stepped forward to testify at a Broome County Grand Jury that Perry faked his injury and then bragged about how much money he was making from Work Comp and Social Security. Perry was arrested in May on his way back from where police think was a visit to Melissa Walker in Las Vegas. Meanwhile Perry was seen , both in Florida and New York, working out, biking and kite sailing in the Gulf of Mexico behind the condo he and Kelly has shared.

Although indicted on Felony Grand Larceny and Fraud charges, Perry used his home in Elmira to post bail after spending five days in jail. Remarkably, with a judge’s permission, Perry was allowed to go to Hawaii last August to visit Melissa Walker.

He married her in a waterfront ceremony on the beach.

Perry remains in Elmira, taunting Kelly’ s supporters on FaceBook and a salacious blog, True Crime Report, where he spews venomous vitriol about Kelly, her family and those who seek justice for her probable death. He conveys a “catch me if you can” attitude towards those that would bring him to justice, stirring up false controversy among Kelly’s many followers and then reveling in the attention.

For a whole year, Kelly’s mother Nancy, her sisters Lauren, Lindsay and Kristen, her father and countless friends and family have been waiting for some news, some clue as to where Kelly is. It’s widely believed that David Perry killed Kelly Rothwell and disposed of her body.

The Rothwell family did not attend the press conference, preferring instead to mourn their devastating loss in a much more personal and private setting. But they are grateful for the love and support that they have been shown since Kelly‘s disappearance and probable homicide. Her mother Nancy lights a candle every night at a memorial they have constructed in her home outside of Baltimore Maryland, where family photos and pieces of Kelly’s history surround her with memories that sustain her. Kelly’s dog Lucy is also now with Nancy and is a constant comfort and a blessing to her, she says. Nancy cannot fathom how anyone would hurt Kelly or why… her pain is palpable,even through the phone.

Kelly’s sisters Lauren and Lindsay, fraternal twins, have also tried to make the incredibly difficult adjustment to life without their big sister. They both say that they know she is around them, that she is free of pain. But it will always be hard to reconcile that Kelly is no longer a phone call or an email away.

Nancy Rothwell,in a phone interview this afternoon, said the Rothwell family is overwhelmingly grateful to the PCSO for the doubling of the reward being offered in the effort to find her daughter Kelly.

“Today is such a painful day for me and my family as we reflect back on Kelly’s life. She was always energetic, kind to everyone, and always tried to trust and find the best in everyone,”she said, emotion welling up in her soft voice.

Sadly, for Kelly Rothwell, her trust in David Perry was horribly misplaced.
And it cost her her life.


This article contains information that was obtained exclusively by me, is copyrighted and cannot be used or reproduced in any way without my express permission for it's reproduction unless/ and/ or/ is expressly attributed to Leigh Clifton and Tampa Bay Crime Report. Leigh Clifton © 2012
Posted by Leigh Clifton at Monday, March 12, 2012